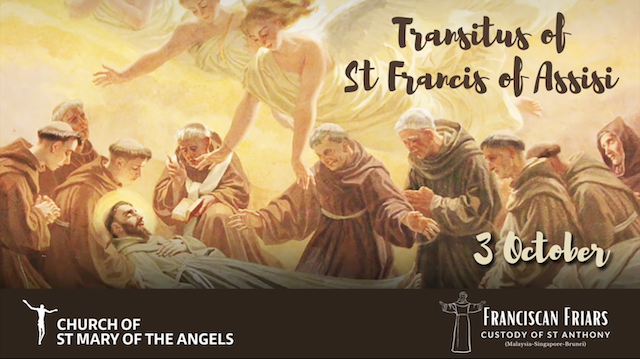 The Final Prayer of St Francis of Assisi – in celebration of St Francis’ freedom from the earthly world, we explore the Transitus of St Francis, his final transition from the world to heaven’s realm.

Just as St Francis said at the end of his life, “The Lord has shown me what was mine to do, may the Lord show you what is yours.”

May we be inspired by the life and example of St Francis to lean into what God has desired for us in our lives, that through our examples, we may be the face of Christ to others.

Transitus of St Francis of Assisi in Singapore

Transitus of St Francis of Assisi in Kuching, Sarawak (Malaysia) 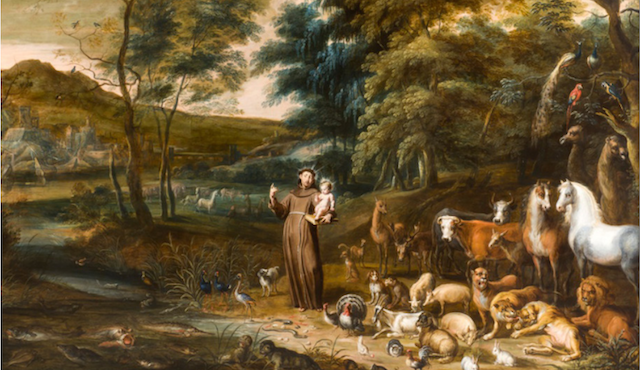 Finding the Divine Good in Creation

On 29 Nov, 1979, Pope John Paul II in his Bull Inter Sanctos, proclaimed St Francis of Assisi the patron of ecology. St Francis is best characterised as an ontological poet and a nature mystic who discovered the inter-relatedness of all beings through a spiritual journey of conversion, penance and praise. It is important for us to see the necessity of both the internal spiritual encounter and the external ecological effect of his spiritual journey for they point the way to our own conversion.

What was it that enabled Francis to be kin with all of creation? What gave him the strength to set aside the human tendency towards subordination or domination? What enabled him to be utterly available and completely focused on the needs of others? As St Bonaventure stated, “Francis was able to return to a state of primaeval innocence – a place full of mutuality and relationship with God and all creatures.” Choosing to live the Gospel, Francis came to know God and to know his truest self. Franciscan theologian Regis J Armstrong holds that Francis used three primary pathways to come to know God ever more intimately – Penance, Poverty and Prayer.

Penance. The Testament of Francis bears witness to his call from God to do penance, that is to embrace a life of loving relationship with God, to see the world as an expression of the Creator’s goodness and to live in hope of the fulfilment of the reign of God. His life of penance was a journey of faith which culminated in conversion. He experienced a new way of knowing and a greater sensitivity to the voice of God within himself and all of creation. More importantly, this conversion led to action. In his Testament, Francis described his embrace of a leper – a point of true conversion in his life. At that moment, he became conscious of God’s unconditional generosity and he responded with a heart sensitive to misery. St Bonaventure talked about other encounters with beggars and he called Francis’ responses acts of pietas – acts of devotion to God and of compassion. Penance is a process of engaging in a spirit-filled life which draws one to the very heart of God. Would we be in an ecological crisis today if you and I lived as Francis lived; with a heart sensitive to misery?

Poverty. Once one has caught a glimpse of the infinitely loving and gracious God, one is confronted with one’s human limitations of sin, arrogant self-centredness, an unhealthy lack of self-confidence and the deceptions of one’s own biases and prejudices. In his 2nd Admonition, Francis taught that the fall of humanity into sin had everything to do with human desire to grasp things and use them in an arrogant and selfish manner. Anotheraspect of poverty is material poverty. For Francis, this was an outward sign of an inward reality — spiritual poverty — and more importantly, an outward sign that led to a deeper reality. As we embrace material poverty more seriously, God alone becomes our treasure which we can both treasure and give away. What if our world leaders, corporate leaders and others had Francis’ sense of material poverty? How different might life be?

Prayer. Francis reminds us that we are empowered to see, know and believe by the same Holy Spirit which animates the very life of God’s self. Indeed, the Holy Spirit enables Christians to recognise the bread and wine of the Eucharist as the Body and Blood of our Lord Jesus Christ, and it enables us to perceive ordinary earthly things as reflections of God. St Bonaventure used a Latin verb “contueri” to describe the capacity to grasp and know things beyond what can be seen. When one knows something through the Holy Spirit, one contuits the particulars such as the size, shape, colour, smell of a rose for example, and also the eternal reasons in those particulars – the love of God the Creator, the beauty of the rose. The more deeply Francis lived in the life of the Spirit, the more he grew in his capacity as a contuitive, delighting in the world as the revelation of the divine. Prayer then must be the starting point of our faith life and also its culmination. For the person who views the world with the eyes of the Spirit, every moment becomes an occasion of contemplation.

In the earlier Rule, chapter 23, Francis wrote, “Therefore, let us desire nothing else, let us want nothing else, let nothing else please us and cause us delight except our Creator, Redeemer and Saviour, the only true God, Who is the fullness of good, all good, every good, the true and supreme good, Who alone is good, merciful, gentle, delightful, and sweet, Who alone is holy, just, true, holy, and upright, Who alone is kind, innocent, clean, from Whom, through Whom and in Whom is all pardon, all grace, all glory of all penitents and just ones, of all the blessed rejoicing together in heaven.” What if our response to God’s love was as total and spirited as Francis’? Would we destroy the fertile soil or pollute the ground waters of our farmland for the sake of money?

Through the threefold pattern – penance, poverty and prayer – we too can be transformed and converted, and then repeatedly recycled through the process to move ever more deeply into the heart of God. Thomas of Celano in the first generation of Franciscan theologians understood St Francis and St Clare to be the embodiment of this eco-theology. As God in Christ looks lovingly upon humanity and its vulnerability,so too must we reach out to the lepers of our day – the poor, the oppressed, the forgotten, the polluted environment, the threatened species. We must value the entire cosmos, and cherish its every member and its particularity for its own sake as they each reveal something of God who is good, totally good.

The Canticle of the Creatures

The Canticle of the Creatures is a hymn of praise that recapitulates Francis’ journey to God in and through the beautiful things of creation… But the Canticle also represents a lifetime of conversion, as Francis strove to be a brother to all things and to praise God in the cloister of the universe despite his sufferings, feelings of abandonment and darkness. In the Canticle, composed one year before he died and while he was laying ill in a small dark hut near San Damiano, Francis sang of the human family (brother-sister- mother) as the model for all relationships. The Canticle of the Creatures is the capstone of his theological vision.

The Canticle reminds us that we humans are as dependent on the elements of creation as they are dependent on us. With his marvellous respect for creatures of all kinds, for sun, moon, stars, water, wind, fire and earth, Francis came to see that all creation gives praise to God. Brother Sun and Sister Moon praise God just by being sun and moon. …

Francis’ relationship to Christ did not follow a narrow path but grew to the widest possible horizon. The deeper he grew in relationship with Christ, the more he found himself intimately related to the things of creation as brother. We might say that his relationship with Christ changed his internal focus. He developed a deeper consciousness of “relatedness” and came to realise he was related to all things no matter how small, because everything shared in the primordial goodness of God, the source of his own life. Francis discovered that he was part of the cosmic family of creation. 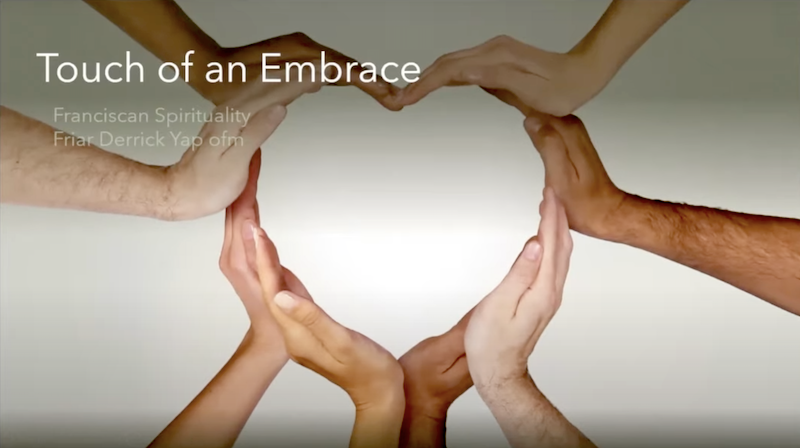 Touch of an Embrace

As part of the Friday Growth Series (A Call to Holiness) organised by the Catholic Spirituality Centre, Friar Derrick Yap was invited to share on Franciscan Spirituality.

In his talk entitled ‘Touch of an Embrace’ ,   Friar Derrick mentioned that  ‘touch is really a very important part of our Franciscan spirituality.’

Find out and experience yourself the touching struggle, touching beauty, touching the deformed and finally touched to conform. 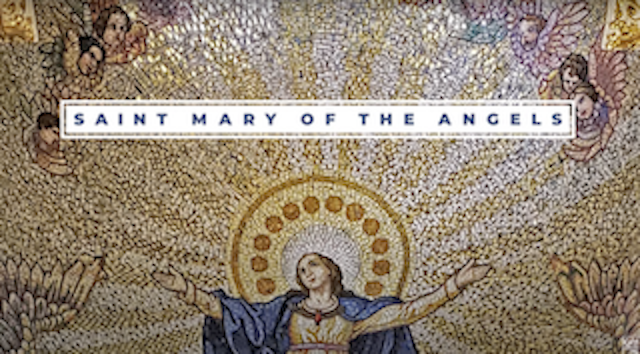 Saint Mary of the Angels

The chapel of St Mary of the Angels in Assisi was significant in the life of St Francis. He not only found his vocation in the chapel, but also spent the final days of his life there. 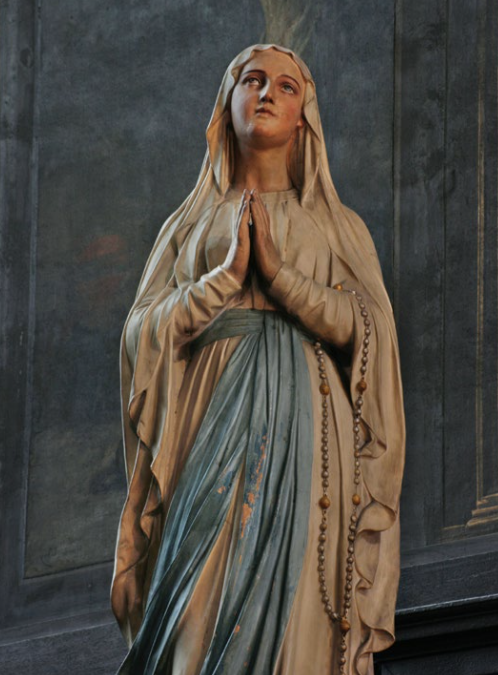 St Anthony even exclaimed: “Through you, Paradise has entered our world!” St Anthony found great delight and strength in invoking the “sweet name of Mary”, the “New Eve” and “Star of the Sea”, and his devoted imitation of the poor, humble Virgin in her poverty, littleness and purity of heart was such that his holy life became the very presence of Mary in the world.

And in the light of his being like Mary, who “always had her mind raised straight up to God in the contemplation of heavenly things”, it is no wonder we have the delightful account of St Anthony holding and adoring the Child Jesus in his arms.

May we learn from St Anthony, in the words of St John Paul II, that “devotion to Mary, by highlighting the human dimension of the Incarnation, helps us better to discern the face of a God who shares the joys and sufferings of humanity, the ‘God-with-us’ whom she conceived as man in her most pure womb, gave birth to, cared for and followed with unspeakable love from his days in Nazareth and Bethlehem to those of the cross and resurrection”.

Mary, our Queen, Holy Mother of God,we beg you to hear our prayer.

Make our hearts overflow with divine grace and resplendent with heavenly wisdom. Render them strong with your might and rich in virtue.

Pour down upon us the gift of mercy so that we may obtain the pardon of our sins.

Help us to live in such a way as to merit the glory and bliss of heaven.

May this be granted us by your Son Jesus who has exalted you above the angels, has crowned you as Queen, and has seated you with him forever on his refulgent throne. Amen.

A prayer of St Anthony of Padua, whose feast we celebrate on 13 June, after the Marion month of May when devotions are made in honour of the Blessed Virgin Mary.