On a fine Saturday morning in July, in the presence of more than 750 people comprising friars, family, friends and parishioners, Friar Nelson Evarinus made his Solemn Profession to observe the Rule of St Francis according to the Constitutions of the Order of Friars Minor. His family and other relatives had made the trek from different parts of Sabah for a front-row seat to witness this milestone in Nelson’s journey as a Franciscan friar.

Friar Nelson is Kadazan, an indigenous ethnic group in Sabah, and it was important for him and the friars that his cultural roots be honoured. Kadazan culture abounded throughout the liturgy. Dancers in traditional colourful clothing made their way up to the church as part of the dramatic entrance procession, and the rousing music, song and local dance inspired spontaneous participation amongst the congregants, especially the stirring renditions of the “Gloria” and “Alleluia”.

Provincial Minister Friar Phillip Miscamble received Nelson’s profession at the Mass at the Church of St Aloysius in Limbanak, Kota Kinabalu on 9 July. In his homily, Friar Phillip said, “Your brothers and sisters welcome the call that you have received, and we will be there to support you as you go forward. Keep radiating the joy of the Gospel with your beautiful smile. Continue to pass along the goodness of God’s people, and build the Kingdom every day of your life.”

At the end of the Mass, Friar Phillip reminded everyone that Francis realised that “the hand of the Lord rested upon him” and as such, the first thing to do in life is to welcome life, and welcome the gifts that the Lord with goodness and graciousness freely bestows. Francis learned to embrace everything and everyone, and this, Friar Philip said, is possible for all of us.

When asked to describe the emotions that ran through his mind before and during the rite of his Solemn Profession, Nelson shared, “I felt a profound sense of peace. It felt right. I was happy to make the offering to God and to make the promise to Jesus Christ to follow the Gospel as well as I am able.”

The four Sabahan friars and one Singaporean friar entered the novitiate together in 2015, and after journeying for nine years, became friar-priests in June and July this year. Friar Robin was ordained by Archbishop William Goh at the Church of St Mary of the Angels, Singapore on 21 June. Friars Cosmas, Crispus, Gerald Terence and Sixtus travelled back to Sabah for their ordination by Archbishop John Wong at Sacred Heart Cathedral, Kota Kinabalu on 2 July.

In a tremendous display of Franciscan fraternity on both occasions, nearly 40 friars were part of the procession that entered the church to the resounding singing of the parish choral ensemble. Provincial Minister Phillip Miscamble concelebrated at both ordination Masses. That family members and friends were able to travel from Lahad Datu, Sandakan, Penang and Johor, and even Indonesia and Thailand for the celebrations made them that much more special.

The vocation journey of any Religious entails the support and sacrifice of those around him, particularly his loved ones, and Friar Phillip thanked the families of the newly ordained priests for the gift of their sons to the Franciscan Order and to the Church. Friar Phillip also made special mention of the Franciscan Sisters of the Immaculate Conception, who have been instrumental in promoting Franciscan spirituality and vocations among the youth in Sabah. It is largely thanks to them that our Custody is now blessed with enough young friars to consider establishing a presence in Sabah

Speaking on behalf of the five of them, Friar Gerald admitted they had had many struggles on their journey towards priesthood, but added that the Lord continues to grant them hope and His divine assistance. He thanked all those who supported them through prayers or mentorship – and urged young people to consider the challenging but rewarding life of a Religious.

“Ordination,” Friar Gerald said, “first and foremost, is being a brother to all and the entire creation. Ordination means continuing the focus on living and preaching the Gospel of love and forgiveness.”

He added, “But another important part of our calling to the priesthood is our desire to bring peace and serenity through the sacrament of reconciliation, to offer the same freedom and peace to others – freedom from worry, anxiety, and whatever may be weighing on them – that has so freely been given to us.”

Truly the two weeks were yet more proof of God’s unfailing providence in the growth of His kingdom in this region. 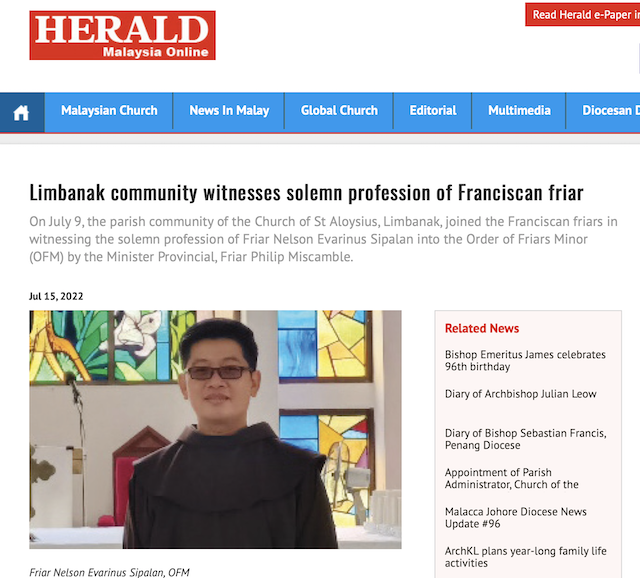 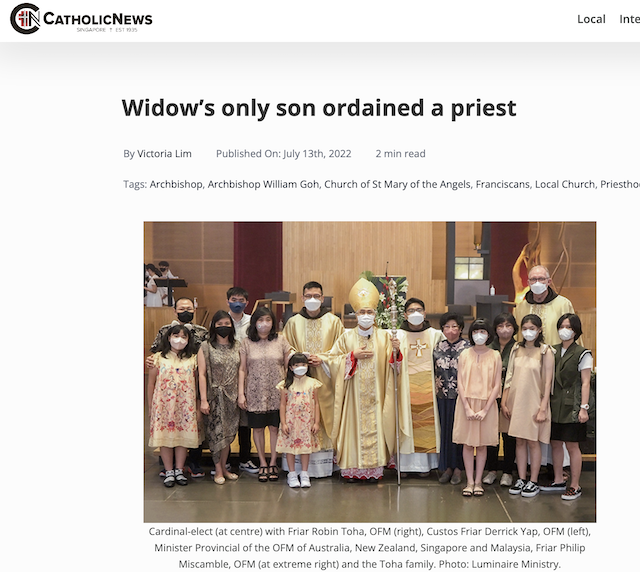 “My heart is full of joy, and I’m so proud of him,” said the mother of Franciscan Friar Robin Toha, Mrs Elsie Toha, with tears in her eyes. “I pray he will be a humble and good priest working in God’s Vineyard.” Forty-year-old Fra Robin was ordained to the priesthood by Cardinal-elect William Goh on June 21, 2022 at the Church of Saint Mary of the Angels.

During the Mass, Cardinal-elect Goh reminded Fra Robin to always be grateful for God’s blessings. “Without gratitude, one becomes arrogant and proud. We must remain humble before the Lord, recognising that He supplies us with the necessary graces for our ministry. The life of a priest is not without suffering and requires dying to self. But I can assure you that you will find great peace and joy if you continue to give yourself generously to God and His people,” he said.

Fra Robin was born the only son to a Buddhist-Taoist family in Palembang, Indonesia. When his father passed away, his mother found comfort in the Catholic Church, and the family was soon baptised. But Fra Robin found it challenging to have faith in God when it seemed that He had ‘taken away’ his father, causing his family much hardship. When he came to Singapore for studies, it was his new Catholic friends and the Franciscan Friars who ministered to the Catholic Student Apostolate at his university that reignited his faith.

Having become a Singapore citizen, Fra Robin felt prompted to seriously consider joining the religious life after miraculously recovering from an illness where doctors only gave him a year to live. Looking back on his faith journey, Fra Robin understood that it was always God who loved him first. “The Lord can never be outdone in generosity. I pray I may always be like the Good Shepherd who lays down His life for His sheep.”

His advice to those discerning their vocation, “Do not make decisions based on other people’s influence or pressure from others. Be open and honest in your discernment – our vocation should lead us to be free to be who God means us to be.”

Archbishop John Wong of Kota Kinabalu Diocese also ordained four Franciscan friars from the Custody of St Anthony, Franciscan Friars of Singapore and Malaysia on July 2, 2022 at the Sacred Heart Cathedral, Kota Kinabalu, Sabah. The four friar priests are Crispus Mosinoh, Gerald Saimel, Cosmas Francis and Sixtus Pitah, OFM. All of them are graduates from the St Francis Xavier Major Seminary in Singapore. Many Singaporeans from various parishes went to celebrate the occasion with the friar priests.